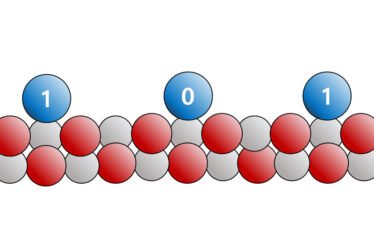 Researchers reveal the mechanism to increase the stability of atomic storage

Combining X-ray techniques and theory, physicists at the Center for Quantum Nanoscience, ETH Zurich, and EPF Lausanne have determined how to protect the information stored in single atom bits against thermal fluctuations.
The amount of information that is presently stored in data centers worldwide has now exceeded the astronomical number of a zettabyte, i.e. one trillion gigabytes. A large part of these data is stored on hard drives and tapes by means of magnetic materials. The ever-increasing demand for storage capacity requires constant research in miniaturizing the size of individual bits with the goal of increasing the amount of data that can be recorded in a single device. Motivated by this pressing need, scientists are exploring ways to store information in smaller and smaller portions of matter.

At the ultimate limit of this research, physicists are tackling the issues related to storing information in a single atom. Using elements with peculiar magnetic properties, such as holmium, it is possible to write information in single atoms, and read these atoms as individual bits. Atoms are the smallest constituent of a material, therefore, writing information in individual atoms could open the path to unprecedented storage capacity. Using this memory, however, is now possible only in physics laboratories. In fact, these objects behave as magnetic memory only at very low temperature, so their functioning requires cryogenic liquids such as liquid helium, which is used to keep the atoms at a temperature of 4.2 Kelvin (minus 269 degrees Celsius). One of the main scientific challenges is to understand the mechanisms that prevent these atoms from storing data at higher temperatures.

Physicists at the IBS Center for Quantum Nano Science at the Ewha Womans University (QNS) have been leading the forefront of this research for a few years already. Their latest work published in Physical Review Letters in collaboration with Swiss and French institutes (ETH Zurich, EPF Lausanne, PSI and ESRF), reveals the way in which these atoms lose their capability to store information and point to the discovery of solutions for how to prevent this from happening.

For this research, they used X-ray absorption spectroscopy, a technique that is available in advanced research centers called synchrotrons, and studied the magnetic memory effect of holmium atoms deposited on a magnesium oxide surface as a function of temperature and applied magnetic field. By shining an X-ray beam on this material, it is possible to measure the magnetic state of a large collection of bits at the same time.

By collecting data over several experimental sessions and comparing this large volume of data with theory, they found out that the holmium atoms’ memory is perturbed when the atoms start to vibrate due to the thermal energy. The higher the temperature of the atoms, the larger the amplitude of their fluctuations while vibrating. This shaking reduces the atom’s ability to preserve its bit of information. However, in contrast to conventional magnetic materials, this effect seems to disappear when an external field is applied.

“This intriguing behavior is a signature of the quantum nature of these magnetic atoms” says Professor Fabio Donati of the QNS, first author of the publication. “Due to the chemical bond that anchors the holmium atoms to the surface, the vibrations of these atoms can only occur at a few discrete frequencies”. In other words, individual atoms have less possibility of vibrating than other magnetic systems made of more atoms.

As physicists learn more and more about the properties of these single atom bits, the idea of realizing atomic data storage devices gets closer to reality. “We are trying to push the maximum operating temperature at which a single atom memory can operate. Understanding the mechanisms that undermine the stability of their magnetic memory is the first step to design novel and more robust atomic bits”. 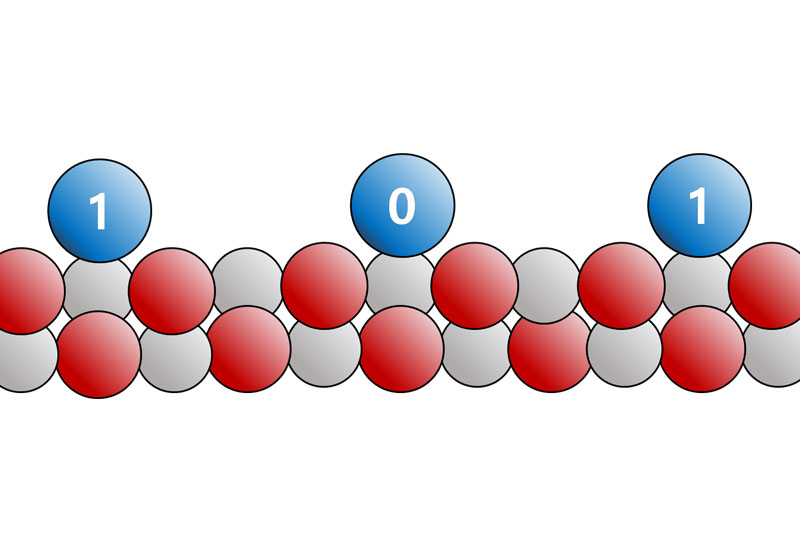