Andreas Heinrich, Director of the IBS Center for Quantum Nanoscience (Distinguished Professor at Ewha Womans University) received the Joseph F. Keithley Award For Advances in Measurement Science from the American Physical Society (APS). Director Heinrich is bestowed the prize for the design and construction of a series of highly sophisticated scanning probe instruments, including the development of inelastic electron tunneling spectroscopy at the single atom and single spin limit, that provided many breakthroughs in the science of measurement.* The prize was awarded to Heinrich at the APS March Meeting 2018 on March 5 in Los Angeles, California, USA.

Director Heinrich is a world-leading researcher in the field of quantum measurements on the atomic-scale in solids. He pioneered spin excitation and single-atom spin resonance spectroscopy with scanning tunneling microscope methods that have provided high-resolution access to the quantum states of atoms and nanostructures on surfaces. Heinrich’s work has received extensive media coverage worldwide. In 2017, his team succeeded in storing one bit of digital information in an individual atom. While the current memory chips require about one million atoms, his study showed they could write a memory of either 1 or 0 in a single holmium atom. In this study, scientists used (Scanning Tunneling Microscope) STM, which has a special tip that enables the user to view and move individual atoms, as well as to apply a pulse of electrical current to them. They used this electric pulse to change the direction of magnetization of individual holmium atoms. This breakthrough represents as the world’s smallest memory unit to store information. Heinrich had already proved to the world how versatile he is when it comes to the world of atoms and structures built with atomic-scale precision. His movie project, titled “A Boy and His Atoms” received a Cannes Lions award at International Festival of Creativity in 2013. Measuring only 45x25 nanometers, the movie is made with a couple of thousands molecules of carbon monoxide. Individual molecules were moved with STM one at a time across a copper surface to feature a boy who befriends and dances with an atom. The movie is the Guinness Book of World Records certified smallest stop-motion film.

His recent paper at Science Advances characterized how a single atom loses its quantum multi states. Quantum computers perform calculations on the basis of quantum properties that allow atoms to be in multiple states at once. But as an atom interacts with its environment over time, it loses this quantum feature and occupies only one state. This limits the capabilities of quantum computers. His research team in collaboration with Christopher Lutz of the IBM Almaden Research Center in San Jose, California, delivered a stream of electrons through the tip of a scanning tunneling microscope and saw that interaction with an individual electron was enough to shift the atom to only one quantum state. They also found that changes to the magnetic properties of the microscope’s tip also affected how long the atom remained in multiple quantum states. Such techniques could be used to design and build nanostructures atom by atom to improve the performance of quantum devices.

Heinrich received his Masters degree in 1994 and his doctorate in 1998 in physics at Georg-August University in Goettingen, Germany. He worked for 18 years at IBM Research, giving him extensive experience in presenting research to corporate and political leaders. Heinrich became a distinguished professor at the Ewha Womans University (Seoul) in August 2016 and started the Center for Quantum Nanoscience (QNS) of the Institute for Basic Science (IBS) in January 2017. Under his leadership, QNS focuses on exploring the quantum properties of atoms and molecules on clean surfaces and interfaces with a long-term goal of quantum sensing and quantum computation in such systems.

“Thank you for this award. I must dedicate this prize to the many talented students, postdocs, and collaborating scientists and engineers that I have been fortunate to work with. I would like to continue to explore the world of atoms as this study will lead us to the ground-breaking science in quantum technology,” Heinrich said. 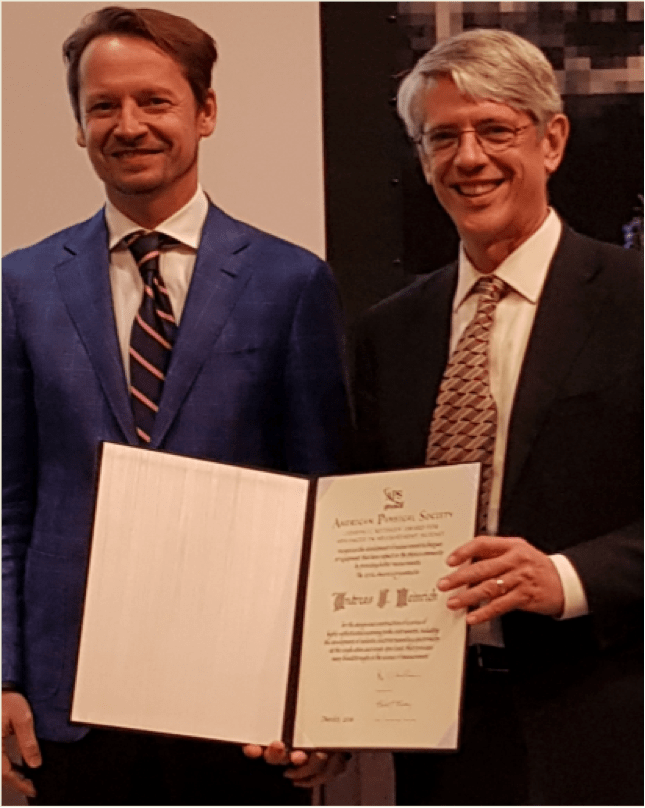 About the Institute for Basic Science (IBS)

IBS was founded in 2011 by the government of the Republic of Korea with the sole purpose of driving forward the development of basic science in South Korea. IBS has launched 28 research centers as of February 2018. There are nine physics, one mathematics, six chemistry, eight life science, one earth science, and three interdisciplinary research centers.