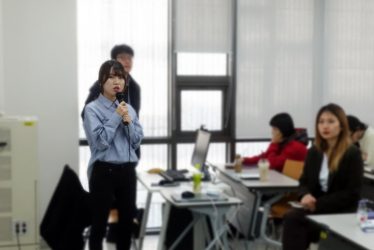 Hi, I’m Kim Jinkyung, a graduate student at the Center for Quantum Nanoscience at Ewha Womans University. I majored in physics and minored in art history as an undergraduate student. Today I’d like to explain what quantum is all about and how quantum science can connect to art. First, what is quantum and how can it relate to art?

Quantum is the minimum unit of any physical entity. It includes atom, electron and photon, a particle of light. Let me discuss the size of an atom, for instance. Do you have any idea of the size of our planet? The planet Earth, where we all live now. This planet is immensely huge beyond our imagination. If we can scale-down the planet to the size of a flower, its proportion would account for the size of an atom. This is the quantum scale. As a matter of fact, quantum can be found everywhere in our daily lives. For example, lasers draw on the effects of photon. Common semiconductors use the effects of quantum mechanics, too. The quantum computer that is being planned for the future is also based on the effects of quantum. Likewise, nanoscience can be defined as applying quantum mechanics in the scale of nano as in semiconductors, in the scale of 10-9 meters. Quantum has very interesting characteristics, which I’m going to reveal one-by-one.

Firstly, quantum’s foremost characteristic is its wave-particle duality. Studies on quantum trace back to those on light. Interestingly light emits waves and particles at the same time. A wave refers to the phenomenon of regular vibrations with energy spreading through space or material. A particle is a dot-like speck, or more specifically a speck with motility. While waves are continuous, particles are individual as they are countable. Yet, light has been proved to possess both waves and particles. In this regard the new concept of quantum also came to be recognized to have the two aspects. This characteristic of Quantum can be better understood through the paintings of Georges Seurat. The world that we recognize through light is continuous. It has no breakages or flaws. However, Seurat filled canvases with countless dots to describe the world that is continuous to our eyes. So his audience may think of the possibility that the actual world might exist discontinuously unlike our recognition.

Secondly, quantum has the principle of uncertainty. Let’s say we see an apple fall from an apple tree in our existing world. If we know the apple’s mass and its location and speed of every moment, we can predict where it may fall on the ground and with what force. In the quantum world, on the other hand, particles exist only in terms of probability. So it’s impossible to precisely understand their motional states. Schrödinger's cat image can explain this well. Let’s suppose there is a very small cat in a tiny box in a very small quantum world. We might not be able to know for sure whether the cat is alive or dead. So the cat can be described as being 50% alive or 50% dead. This is because the cat’s state purely lies in probability. Some artists incorporated this principle of uncertainty into their work. In the exhibition one media artist expressed uncertainties behind the civil war in his country. Another artist described the unclear boundaries between the mental world and reality.

The third aspect of quantum is superposition. The concept of superposition stems from waves. Let’s suppose there are two waves: One is moving left and the other moving right. The sum of the two waves is called superposition. But in the quantum world, the concept of superposition changes slightly. If ‘0’ refers to the state of a particle inside a box and ‘1’ outside, then a box a sum of the two states is a superposition in the quantum world. The particle is 50% inside and 50% outside in probability. The characteristics of superposition are vividly illustrated by Picasso’s paintings. Picasso defied the unitary perspective on space and cast new perspectives of showing the front and side of an object together. These paintings show an overlap of two images of an object: One seen from the front and the other from the side. That is why I think Picasso’s paintings can be interpreted through a precise knowledge of quantum. Yet, superposition is not created simply by overlapping two images. Rather, it is a co-existence of two states with different energies.

The last characteristic of quantum is entanglement. Entanglement literally means two particles sharing their state. In the existing world it is thought that the closer any two particles get, the stronger their interactions, and vice versa. Thus, if they become infinitely apart, they are regarded as completely separate. In the quantum world, however, if two particles are entangled in the first place, - in other words sharing the same state, they remain entangled no matter how far apart they are. One artist so clearly expressed the characteristics of entanglement in his work. And that is Antony Gormley’s sculpture named Quantum Cloud. This sculpture consists of a human body form at the center and a loosely built structure surrounding it. Gormley named the surrounding structure as “human skin.” In my opinion, not only the human body form at the center and the “human skin” structure are entangled physically, but the sculpture’s boundary itself is ambiguous, which means the sculpture and the background are entangled as well. I’ve briefly touched on how quantum may connect with art.

The official page of Art Contest "The World of Quantum"

Junkyung Kim "How Do Art and Quantum Nanoscience Connect?"

Photo from the public lecture: 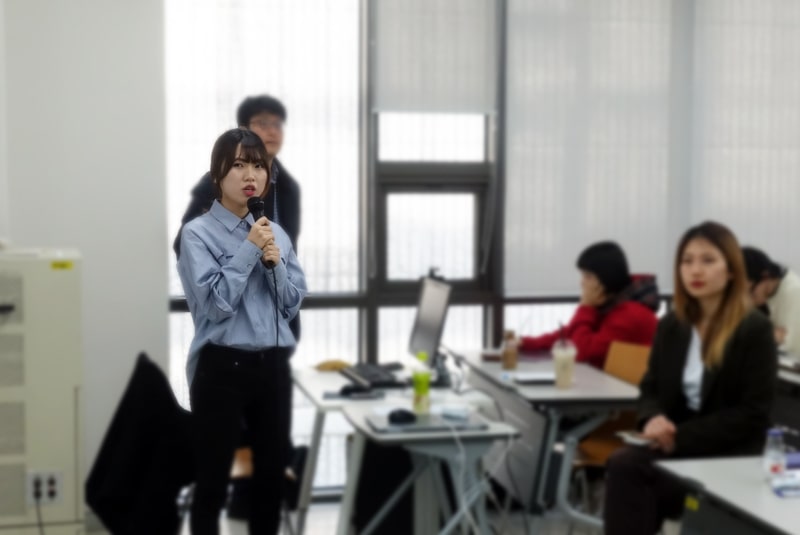