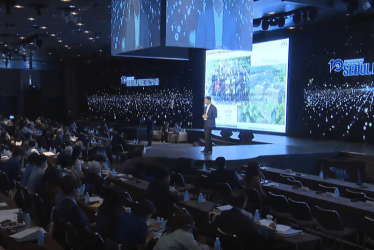 Seoul Forum 2019 was the 10th event hosted by Seoul Economic Daily. This year the topic was basic science. Andreas Heinrich, Director of Basic Science Institute (IBS) Center for Quantum Nanoscience, was invited to speak on 'Breaking down the Wall-Creativity and Communication.' Watch Professor Heinrich's lecture in the following video from the 'Seoul Forum 2019' (from 2:37:00). Today the lecture of Andreas Heinrich was discussed in the Sedaily newspaper. Read our unofficial translation of the article below.
Andreas Heinrich, well known as a quantum mechanics expert, emphasized the necessity of strengthening basic science competitiveness through continuous funding such as "long-term investment is necessary for great scientific achievement". He said that in order for Korea to achieve global scientific research achievement, it is necessary to provide stable funding, independence of research, and long-term research for innovative achievement.

"Gravitational Waves" is a representative example of the accomplishments of his long-term research. "Gravitational waves have been studied from 1980 to 2015 under the auspices of the National Science Foundation." "On the other hand, Korea has a strong culture of 'fast and fast' which should all proceed quickly, and emphasized, 'to foster basic science, we must eliminate' fast as soon as possible '."

On this day, Mr. Heinrich's lecture caught the audience's attention with an easy-to-understand example. As for the quantum mechanics and molecules and atoms that he studies, he explained, "If the size of an atom is a coin, the size of the coin made of these atoms will be the earth." In order to explain the world of quanta, which is a particle of light or a wave, it is possible to describe the world of two objects or objects at the same time, Georges Seuras, a 19th century impressionist painter who expresses particles of light by drawing points. Referring to Pablo Picasso, "The simultaneous appearance of the front and sides of an object in Picasso's painting is similar to the quantum mechanics principle superposition."

"We need to train for the next generation of science and technology leaders," he said. "We should make it easier for younger generations to come to nanotechnology through YouTube and various science-based art activities." ..."

The Korean article was written by Yang Chul Min (chopin@sedaily.com).