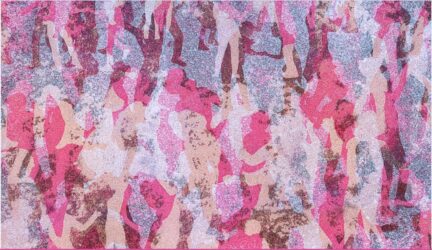 In the history of quantum physics, scientists’ thoughts have become reality

“In the field of quantum mechanics, when your frequency and my match, resonance is produced and energy becomes stronger. That’s what is called a synergy effect!”

It’s a quote by the main character Chan-woo Lee (Played by Hae-soo Park) to investors in the recently released movie, “Quantum Physics’,” when he prepares a splendid opening of the club. He applies the physics expressions to his business philosophy, aiming at the ceaseless business expansion.
As if “resonance” occurred, the opening is successful at the beginning of the movie. Another quote that he often uses is “thoughts create reality’.” As the newly opened club is implicated in the crime of a famous entertainer, things start to go wrong and get complicated. Whenever he encounters difficulties, he reminds himself that thoughts create reality, believing the quote like magic words. It seems that the same quote boosts the energy of the characters around him for they constantly get into trouble because of the incident snowballing out of control. By the way, from the perspective of physics, is it true that thoughts create reality? As everyone knows, no matter how much we think about something, thoughts do not become reality. Thus, the quote in the movie is used as a religious belief rather than a scientific fact. Then, the quote itself is considered wrong.

However, in the history of quantum mechanics, it can be true that scientists’ thoughts have become “reality” indeed. Like all the other sciences, quantum physics is the discipline that required especially innovative and abundant “thoughts” in its establishment. That is why phenomena that cannot be explained with common sense should be interpreted based on various assumptions.

Double-slit experiment with everything about quantum physics

Let’s take a look at the double-slit experiment, one of the most famous phenomena. It is a well-known experiment to such an extent that quantum physics is considered to have started with this experiment. Indeed, Richard Feynman, a modern physicist, stated, “this experiment contains everything about quantum mechanics”.

In the world, there are particles like balls and waves like water waves. They are totally different though. For example, a thrown ball changes its place but a wave does not. Think about an audience cheering by performing waves in a stadium. While waves are moving toward one direction, the audience, in fact, is just standing up and sitting down, never moving away from their seats. It will be easy to understand if you think about light and sound being conveyed this way with energy only flowing.

Different waves lead to interesting phenomena. As Hae-soo Park said in the movie “Quantum Physics,” when waves on the same frequency meet, their strength intensifies. It is called resonance, whose energy can be very strong. One example of this can be found in Tacoma Narrows Bridge of the US, which collapsed in 1940 only four months after its opening. Despite the weak wind, the frequency of the bridge and that of the neighboring wind were the same, generating energy with big resonance.

Tacoma Narrows Bridge opened in Washington, US in 1940 collapsed four months after the opening because of resonance where the wind provided a frequency matching that of the bridge.
(Source: Flickr)

When two waves move in the same direction, they sometimes show a phenomenon called interference. As there is no easy-to-find example in daily life, let’s look at the double-slit experiment. The picture below shows an electron gun that fires electrons, a place pierced by two parallel vertical slits, and a screen that will change its color when an electron strikes. When the electron gun fires electrons toward the double slits, electrons passing through the slits interfere like waves, producing a pattern of several lines. It is called an interference pattern. The Interference pattern is generated only with waves. 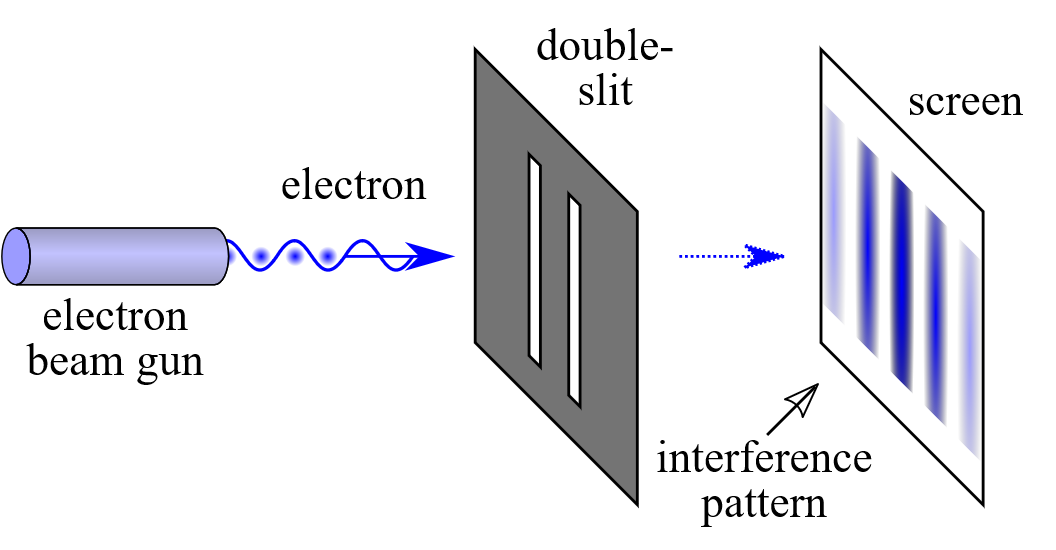 Layout of the double-slit experiment. When an electron gun fires electrons toward the double slits, electrons passing through them interfere with each other, producing a pattern of lines.
Source: Wikipedia

Wait a minute! Here is something very strange by the way. We learned from school that an electron is a small particle. Then why is the interference pattern generated? Particles do not interfere. Scientists strongly believed that an electron was a particle and they could not accept the interference pattern generated by the electron gun. Therefore, they placed an electron detector in front of each slit to see how the particles of electrons passed through the slits and produced the pattern. This way, they checked one by one which slit electrons passed through. 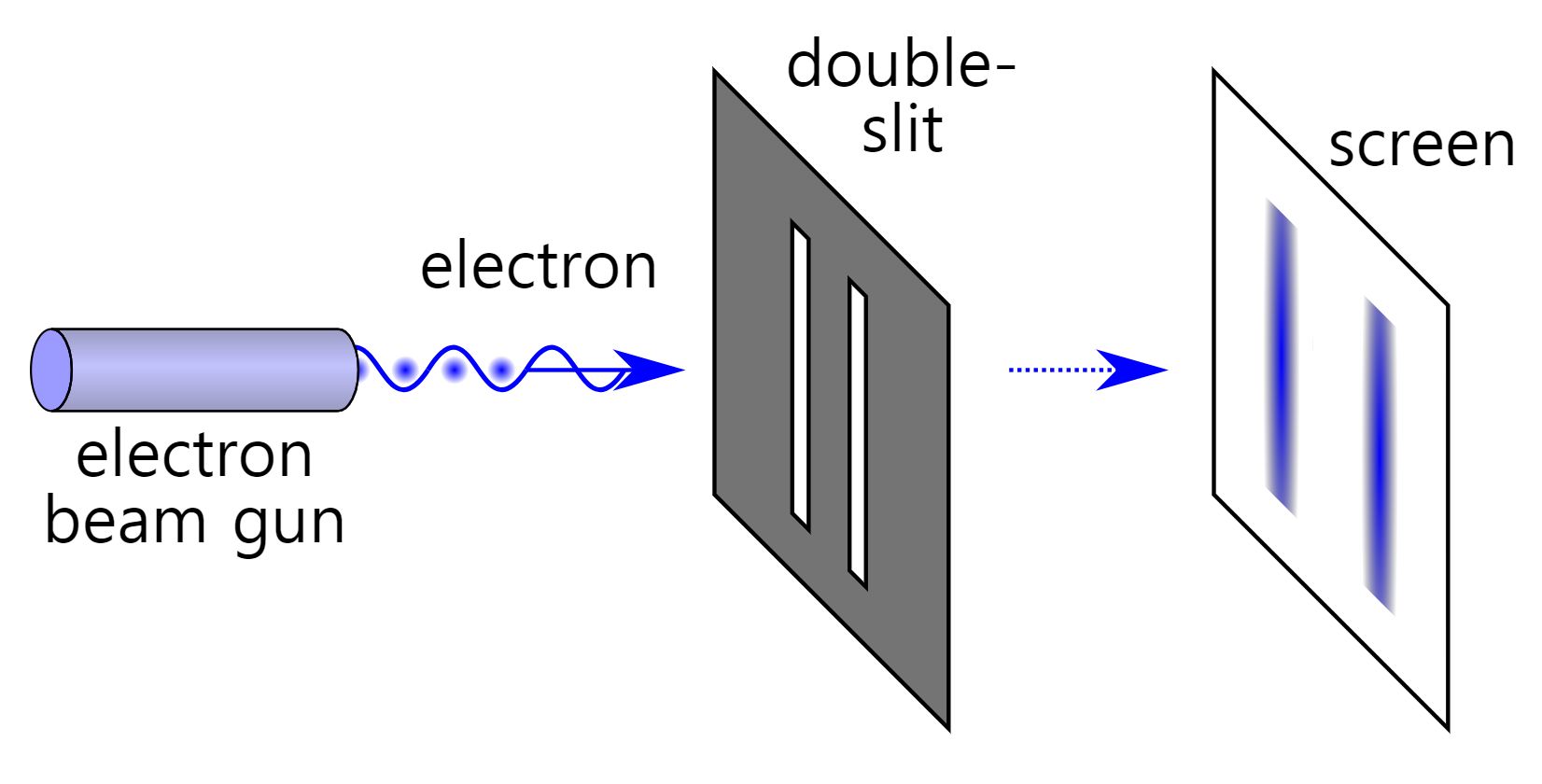 When the movement of electrons is observed in the double-slit experiment, the pattern of interference disappears and the two lines appear.
Source: Wikipedia

The key conclusion of this experiment is that electrons show the characteristics of both waves and particles. This concept of duality was out of the question in the physics world. Many people did not agree with this. Niels Bohr, one of the foundational contributors to quantum physics, said, “anyone not shocked by quantum mechanics has not yet understood it.” If you heard the double-slit experiment for the first time but were not shocked, it is recommended to think over what was strange.

After many heated debates in the academic world, physicists started to accept the duality of electrons. They agreed to “think” that electrons are sometimes particles and sometimes waves. This was totally opposite to classical physics and was “innovation” itself. Marvelously, quantum physics started off with this and became reality in our life.

Quantum physics inspires art, maybe because it has attractiveness not easy to understand. Some artists now express the duality of electrons that was hardly accepted in the academic world. One of them is the Maltakjin team that consists of artists Hotak Lee, Ryeojin Lee, and Yoonyoung Jo (Jo Mal).

In their work “Gaagaadonut,” metal balls on the round table make a circular movement and fall into the hole at the center. More specifically, metal balls symbolizing electrons fall down one by one onto the round table as if electrons were fired from an electron gun, drawing a circle toward the center. This circular movement represents waves. As several magnets rotate under the table, metal balls stop and stick to one another when they come into contact with the magnets. This expresses the electron pattern changed from waves to particles by external observation. It expresses an electron’s sudden change of pattern from waves to particles in the double-slit experiment when a detector is placed in front of the slits. When a rotating magnet moves away from the round table, causing the metal ball to fall, the ball falls toward the center as if the state of an electron returned to a wave. The double-slit experiment where the duality of electrons abruptly switches depending on observation is reborn in beautiful art. Maltakjin says, “We intend to liken the work to the appearance of electrons turned from waves to particles at the moment of observation in the double-slit experiment.”


Min Jeong Jo, the creator of “One and Two Incense,” heard quantum physics that was about the foundation of the matter when she was working with interest insubstantiality of human existence. Afterward, she compared what she learned from quantum physics with burning incense. This work is a stop-motion animation that combines real smoke photographed with a charcoal drawing. Results of respective drawing and erasing images on one piece of paper were scanned a total of 176 times to express the appearance of gradually burning incense.


One work expresses another quantum characteristic of “quantum superposition.” It is “Twist” by Myoung-hee Lim. In classical mechanics, the matter can stay in either state of being in motion or remaining at rest. In quantum physics, a state of matter is only defined by probability, which is called superposition.

In the work "Twist,” a dancing woman is overlapped, making it impossible to exactly locate her. The place where she has danced can be pointed out only with probability. It is like a state in quantum superposition. To express this, Lim took pictures of a dancing woman in different places and developed the photos to make a temporary film of several pieces. Then, Lim put them all in one image in gum printing. This work was donated by the artist and will be exhibited permanently in the Center for Quantum Nanoscience at Ewha Womans University.

The World of Quantum, art contest
by IBS Center for Quantum Nanoscience

These works were submitted to The World of Quantum, an art contest by IBS Center for Quantum Nanoscience in 2019. Generally, it can be difficult for nonprofessionals to understand research if researchers directly explain it but will be an easier approach if the public directly talks to the public.

Given this idea, “The World of Quantum’ is an art contest intended to promote quantum nanoscience, the research subject of IBS Center for Quantum Nanoscience, to the public in a new manner. In the contest, the general public and artists variously interpret the subject and artistically express their own clarifications of the works. “Gaagaadonut” and “One and Two Incense” introduced earlier won third prize and the first prize (Award of Director of Center for Quantum Nanoscience), respectively. Images of other prize-winning works and works in the finals are available at https://qns.science/art.

In April, ISB Center for Quantum Nanoscience had an explanation lecture and a Q&A session under the theme: “How Do Quantum Science and Art Relate?” to present the research of the center to contest participants. During the session, about 70 people attended and had lively discussed for more than a couple of hours. Most of the participants in the session consisted of professional artists. The public showed a huge interest in quantum science during the discussions.

In the preliminary round, closed in June of 2019, about 400 artists participated and five works won the prizes after the final round of evaluations by an international panel of judges. The award ceremony was held during the dedication ceremony for the Center for Quantum Nanoscience on September 26th. In the fall of 2019, the exhibition of showing 44 works in the final round including prize-winning works, was held at the Research Cooperation Building of Ewha Woman’s University. The Center for Quantum Nanoscience hele an ‘Art Exhibition Celebration Open Lab’ event at Collaborative Research Building on November 22. People enjoyed a variety of activities such as a special lecture by the director of the Center for Quantum Nanoscience, a lab tour, and free discussion with researchers. 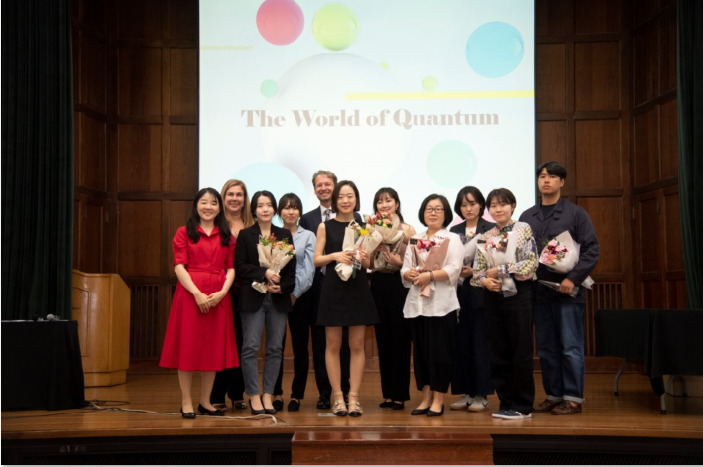 Director of IBS Center for Quantum Nanoscience and prize-winners pose for a group photo in the award ceremony of art contest The World of Quantum.
Source: Ewha Woman’s University

Good to read with:
https://qns.science/art