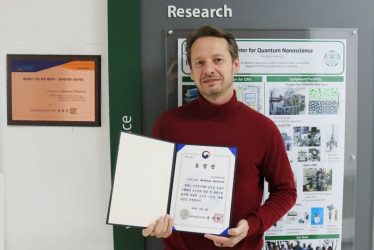 Andreas Heinrich, director of the Center for Quantum Nanoscience within the Institute of Basic Science located in Ewha University, received a prize from the Minister of Science and ICT for his groundbreaking discovery on December 28th, 2018. The prize was given at an awards ceremony for the 2018 Excellent National R&D Performances. The ceremony was held to acknowledge outstanding scientists, engineers, stakeholders and institutions that had produced excellent results in 2017.
Professor Heinrich won an award for developing the smallest memory storage unit in the world. He succeeded in reading and writing one bit of information with a single holmium (Ho) atom. Currently, commercial memory requires about 100,000 atoms to store one bit. In user terms, this technology would enable users to store half a million movies on a single coin-sized USB memory chip once commercialized.

The discovery itself is still basic research at the nanoscale. A holmium atom placed on a magnesium oxide (MgO) surface has one spin state, in either the up or down direction. A scanning tunneling microscope (STM) can read the spin’s state by measuring the current flowing through the atom. If you apply a strong voltage to the atom with an STM tip, the atom’s spin changes. In this way, the scientists were able to store digital bit signals, '0' and '1', in a single atom. The results were published in a joint paper with IBM Research in Nature on March 9, 2017.

Heinrich said, "It is a great pleasure and honor to be able to contribute to the great basic science research in Korea. I especially want to thank the Minister of Science and ICT for recognizing our work with this prestigious award and I look forward to achieving more cutting-edge breakthroughs as part of the Korean scientific community." 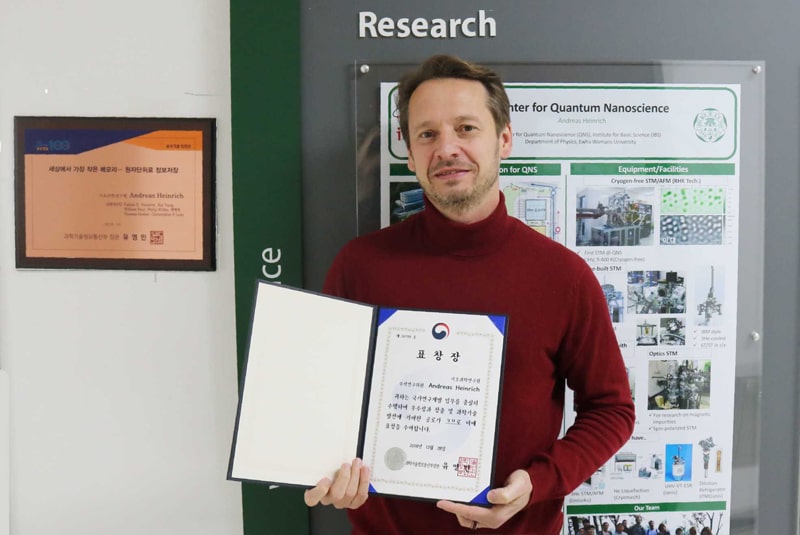